Los Angeles [USA], February 27 (ANI): Golf legend Tiger Woods, who was involved in a single-car accident, is recovering after receiving additional procedures at Cedars-Sinai Medical Center.
Woods had suffered significant orthopaedic injuries to his right lower extremity but the golf superstar is now in "good spirits" after the treatment.
"Tiger has moved to Cedars-Sinai Medical Center and received follow-up procedures on his injuries this morning. The procedures were successful, and he is now recovering and in good spirits," a statement read from Tiger Woods Twitter account.
"Tiger and his family want to thank you all for the wonderful support and messages they have received over the past few days. We will not have any further updates at this time. Thank you for your continued privacy," it added. 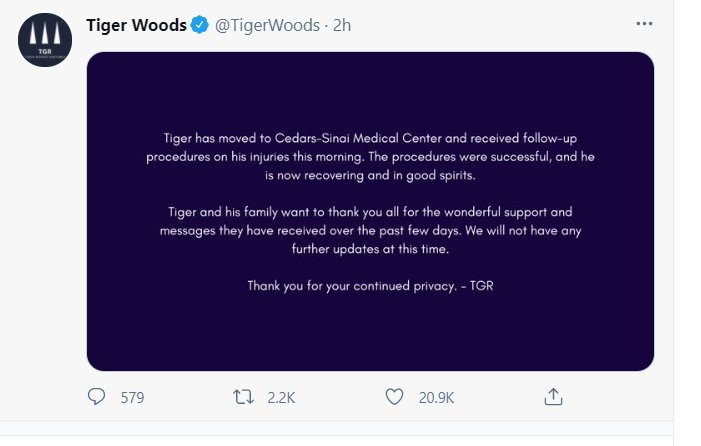 Earlier this week, in a statement released on Woods' Twitter account, Anish Mahajan, MD, Chief Medical Officer and Interim CEO at Harbor-UCLA Medical Center, informed about the extent of injuries suffered by the golfer.
"Woods suffered significant orthopaedic injuries to his right lower extremity that were treated during emergency surgery by Orthopaedic trauma specialists at Harbor-UCLA Medical Center, a level 1 trauma center. Comminuted open fractures affecting both the upper and lower portions of the tibia and fibula bones were stabilized by inserting a rod into the tibia," the statement quoted Mahajan as saying.
"Additional injuries to the bones of the foot and ankle were stabilized with a combination of screws and pins. Trauma to the muscle and soft-tissue of the leg required surgical release of the covering of the muscles to relieve pressure due to swelling," it added.
Woods was injured after the car he was driving met with an accident in Los Angeles County on Tuesday. (ANI)